DVD of the Week: The Expendables 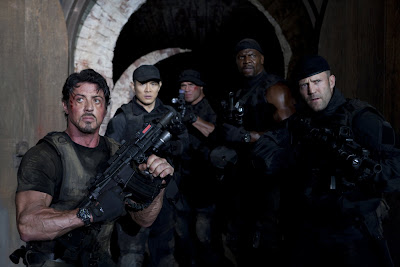 For fans of action films from the 1980s and early 1990s, it has always been a pipe dream to see their favourite action stars team up or, better yet, battle each other. Think of it as the cinematic equivalent of fantasy football. With The Matrix (1999), the heyday of muscle-bound action stars like Sylvester Stallone was well and truly over as more normal-looking (physique-wise) actors, with the aid of cutting edge CGI, started doing their own stunts. Former marquee stars like Jean-Claude Van Damme and Steven Segal were relegated to direct-to-home video limbo.


However, over time, people began to look back at that era of action films with nostalgia and Stallone wisely capitalized on it by resurrecting two of his most popular characters, Rambo and Rocky, to critical acclaim and respectable box office. The success of those films culminated in Stallone’s penultimate film, The Expendables (2010). Using his rejuvenated clout and reputation, he cast veteran action stars like Dolph Lundgren and Jet Li, bad boy character actors Mickey Rourke and Eric Roberts, and ultimate fighters and professional wrestlers like Randy Couture and Stone Cold Steve Austin. The real coup for Stallone was coaxing two of the other popular action stars from the ‘80s, Arnold Schwarzenegger and Bruce Willis, to appear in the same scene with their fellow Planet Hollywood owner. The end result is an action film fan’s wet dream.

Barney Ross (Sylvester Stallone) is the leader of an elite group of mercenaries and, in a nice nod to current events, we are introduced to them wiping out a gang of Somalia pirates with plenty of cheeky one-liners, swagger and ultra-violence, including a cool bit where the good guys eliminate some baddies via night vision. Soon afterwards, the enigmatic Mr. Church (Bruce Willis) hires Ross and his crew to take out a ruthless dictator who controls a small, South American country. It turns out that the dictator is just a puppet for James Munroe (Eric Roberts), an ex-CIA operative now corrupt businessman. Ross and his crew of four men are forced take on a small army. The odds sound about right and much carnage ensues.

The cast of The Expendables is uniformly excellent. Mickey Rourke shows up as the guy who fixes Stallone and his gang up with jobs and we get a nice scene where the recent Academy Award nominee, in all of his Method acting glory, banters with Stallone and Jason Statham. Bruce Willis, complete with his trademark smirk and steely-eyed stare, plays the mysterious Mr. Church. Stallone shares a scene with him and Arnold Schwarzenegger that is the action film equivalent of the famous scene between Robert De Niro and Al Pacino in Heat (1995) – an understated meeting between legendary movie stars sharing the same frame. Eric Roberts gets to play a deliciously evil scumbag with just the right amount of suave menace complete with slicked-back hair and expensive suits.

All of the action stars get a chance to strut their stuff with Stallone and Statham getting the bulk of the film’s screen-time as if the former was symbolically passing the torch to the latter. One of the film’s most pleasant surprises is Dolph Lundgren as a psycho junkie ex-member of the Expendables who ends up working for the bad guys because Ross didn’t approve of his sadistic killing methods. Lundgren even gets a very cool fight scene with Jet Li. 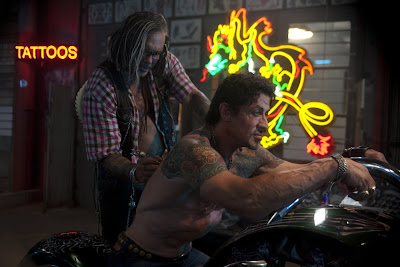 There hasn’t been a decent men-on-a-mission film (a la Dirty Dozen) in some time. Inglourious Basterds (2009) could have been that film but Quentin Tarantino mutated it into something uniquely his own. Stallone goes for a meat and potatoes approach with The Expendables that has a refreshing old school feel to it. It has everything you could want from a film like this: bone-crunching violence, tough guys cracking wise, lots of earth-shattering explosions, and bad guys you love to hate. For fans of ‘80s action films, this is a dream come true and one hell of a fun ride.

There is an audio commentary by actor/director Sylvester Stallone. He talks about how he established his character and his crew visually with very little dialogue. He also defends the sparseness of dialogue against criticism that it wasn’t very well-written. Stallone praises Mickey Rourke’s performance and how he only had the actor for 48 hours because he was making Iron Man 2 (2010) at the time. Naturally, Stallone talks about the logistical nightmare of getting Arnold Schwarzenegger and Bruce Willis to have time to do their scene together. Stallone speaks eloquently about the nuts and bolts aspects of making the film and what his intentions were for a given scene. 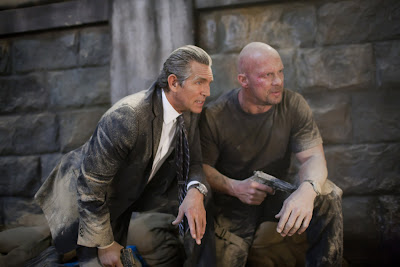 There is a deleted scene which is just a bit of extra footage early on where Dolph Lundgren tells a bad joke needlessly reinforcing the craziness of his character. Yeah, we get it.

“Gag Reel” is an amusing blooper reel of the cast flubbing their lines.

Finally, there is a theatrical trailer, T.V. spots and posters.