DVD of the Week: The Night of the Hunter: Criterion Collection 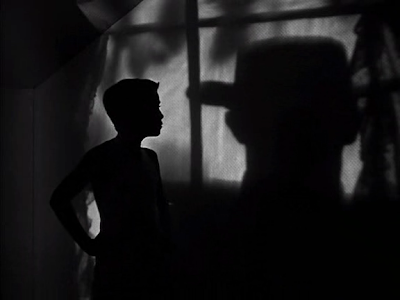 It is one of the great tragedies of cinema that The Night of the Hunter (1955) was Charles Laughton’s lone film directing credit. An acclaimed character actor by trade, he decided to adapt David Grubb’s 1953 novel of the same name into a haunting southern gothic horror film cum fairy tale. He enlisted film critic/screenwriter James Agee (The African Queen) to write the screenplay and hired cinematographer Stanley Cortez (The Magnificent Ambersons) to bring his considerable expertise to the textured black and white imagery. Sadly, audiences at the time were not ready for this atmospheric fable and it failed to perform at the box office. Laughton died seven years later and never directed another film. However, over the years, The Night of the Hunter was rediscovered by critics and film buffs and its reputation grew as people finally caught up to a film that was ahead of its time. Its legacy is now firmly established and the film is regarded as a classic. It is rather fitting that the Criterion Collection has delivered the definitive edition of this film.


One of The Night of the Hunter’s earliest images is a disturbing one as a group of children playing come across the body of a dead woman. All we see are her legs lying on steps leading down to the cellar of a house. There is something unsettling about how one of her shoes is twisted off an odd angle from her foot. This scene sets the tone for the rest of the film – that of innocence lost. We are soon introduced to Harry Powell (Robert Mitchum), a fire and brimstone preacher who preys on vulnerable widows – killing them and stealing their money, all in the name of God. He talks to God about his disgust for the feminine aspects of women and the next thing we see is him watching a curvy burlesque dancer swaying suggestively in front of him. Powell clearly embodies the dual nature of love and hate – the words of which are tattooed on the fingers of both his hands.

We meet John (Billy Chapin) and Pearl (Sally Jane Bruce) playing in an idyllic rural setting. Their fugitive father, Ben Harper (Peter Graves), arrives with the law hot on his trail. He has stolen $10,000 and hides it amongst his two children. He goes to prison and is put in the same cell as Powell. The crazy preacher finds out about the money but Harper doesn’t tell him where it’s hidden. After his cellmate is executed for his crimes, Powell gets out and makes his way to Harper’s hometown, traveling on an ominous-looking train by night. He ends up marrying Harper’s widow, Willa (Shelley Winters) in an attempt to get closer to the children and find out what happened to the money.

John learns pretty quickly that not many adults can be trusted, especially Powell whom he figures out his true intentions early on. John also looks out for his sister as their mother and her friends are easily captivated by Powell’s charisma. This is beautifully illustrated in a scene where Powell tells the story of love and hate, quoting The Bible with a gusto that is pretty funny and brilliant in the way Robert Mitchum enthusiastically tells it. Normally cast as laconic soldiers (G.I. Joe) or film noir tough guys (Out of the Past) prior to this film, he cranks up the intensity with this role and is not afraid to look silly at one moment and viciously evil in the next. Powell is the film’s metaphorical boogeyman that ends up chasing John and Pearl across the countryside in pursuit of the money like if the Adventures of Huckleberry Finn had been written by William Faulkner.

Laughton gets very impressive performances out of the two children, both of whom more than hold their own with veteran actors like Mitchum, Shelley Winters and Lillian Gish. The latter is excellent as Rachel Cooper, a kind old lady who takes the children in and protects them against Powell. The showdown between her and Mitchum is one of the film’s best scenes. 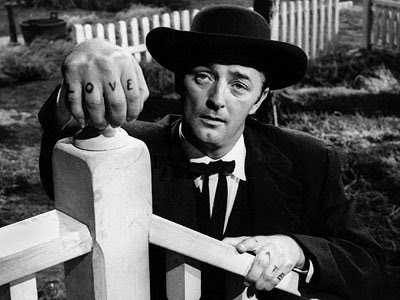 With The Night of the Hunter, Laughton fuses a theatrical sensibility in the performances with a German expressionistic look that results in a fairy tale unlike any other. There are images that linger afterwards and haunt you for a long time, like the iconic shot of a woman bundled up in a car at the bottom of a lake. The Night of the Hunter explores the destructive nature of greed and the dangers of religious fanaticism while the eternal struggle between love, as represented by Cooper, and hate, as personified by Powell, plays out with the two children’s lives hanging in the balance.

The first disc starts off with an audio commentary moderated by film critic F.X. Feeney and featuring the film’s second-unit director Terry Sanders, film archivist Robert Gitt, and Preston Neal Jones, author of Heaven and Hell to Play With: The Filming of The Night of the Hunter. They point out that Laughton wanted the film to seem like it was being told from the children’s point-of-view, as if they were having a nightmare. The participants analyze the use of humor throughout the film and how it offsets the darkness of the Harry Powell character. They also get into a lively discussion about James Agee’s screenplay and how the original, longer version was very faithful to the source novel. There is some debate about how much of it Laughton rewrote. This is a very informative track, chock full of factoids, analysis and filming anecdotes to satisfy any fan of this film.

“The Making of The Night of the Hunter” is a 38-minute retrospective featurette that takes us through the genesis of the film as producer Paul Gregory talks about how he met Laughton. Interestingly, Laurence Olivier was considered for the role of Powell. Laughton worked closely with Davis Grubb and James Agee to make sure that the film was a faithful adaptation.

“Moving Pictures” is a 15-minute documentary about the film with interviews with key cast and crew members, including Mitchum, Winters and cinematographer Stanley Cortez. While this extra does repeat information from the previous supplement, it is nice to hear these details directly from the people that actually worked on the film.

There is a 1984 interview with Cortez about filming The Night of the Hunter. He speaks admiringly of Laughton and his ability to work with the actors. Cortez says that Laughton knew nothing about the technical aspects of cinematography and trusted him implicitly with the look of the film. Cortez also touches upon the use of light and how he lit certain scenes for a specific effect.

“Simon Callow on Charles Laughton” is an interview with the author of Charles Laughton: A Difficult Actor. He talks about the man’s career and how The Night of the Hunter affected his life. Callow points out the irony that Laughton is known more for directing this film than his extensive acting career. He was very active in live theater and this is what led to his involvement in the film. Callow talks about what drew Laughton to Grubb’s novel and covers the production with an obvious emphasis on Laughton.

There is an interest excerpt from the September 25, 1955 episode of The Ed Sullivan Show where Peter Graves and Shelley Winters perform a scene not in the film. Willa visits Harper in prison, which sheds some insight into their relationship. 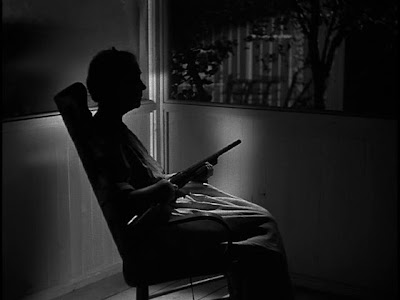 “Davis Grubb Sketches” is a collection of drawings that he produced for Laughton to help convey how he envisioned his novel. These sketches are juxtaposed with stills from the film to demonstrate how closely Laughton stuck to them while filming.

The second disc contains the crown jewel for fans of the film. “Charles Laughton Directs The Night of the Hunter” is two-and-a-half hours of unused footage and outtakes. There is a conversation between film archivist Robert Gitt and film critic Leonard Maltin that provides some backstory on how this footage was discovered. Gitt was given it in the mid-1970s but it was so disorganized that it took him several years to make sense of it all. Doing it piecemeal when he had the time, he and many volunteers worked away until they had eight hours of footage. He then edited it down to two-and-a-half hours and screened it at UCLA. This footage provides fascinating insight into Laughton’s working methods, especially how he got those great performances out of the two children. For fans of The Night of the Hunter, this is a treasure trove of material.