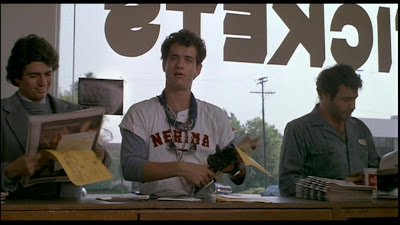 I had to laugh when I read reviews describing the raunchy comedy The Hangover (2009) as "fresh" and "edgy." Obviously, these critics had never seen Bachelor Party (1984), which came out in the mid-1980s and is a much edgier, raunchier comedy because it was made at a time when movies like that could get away with a lot more. Does The Hangover have a donkey snorting lines of cocaine? I think not. Does The Hangover have a two-time Oscar winner playing its protagonist? I think not. Yes, Bachelor Party stars a so unfunny it's funny Tom Hanks in a performance I'm sure he'd like to forget as Rick Gassko, a wild and crazy guy (in the Steve Martin sense) whose friends throw him a bachelor party to end all bachelor parties.

Like many protagonists in ‘80s comedies, he is a man-child with a job befitting his social status: school bus driver. His best friends also have blue-collar jobs – department store portrait photographer, incompetent mechanic, concert ticket seller, and barely literate waiter. They all work 9 to 5 jobs and live for the weekend. If you like raunchy comedies from the '80s featuring Adrian Zmed, then this one might be for you. Bachelor Party sets out to offend as many people as possible and succeeds. So, here are 15 highlights (or lowlights depending on your view) from this beautiful disaster of a movie that has fascinated me and my friends for years.

1. “Let’s have a bachelor party! With chicks and guns and fire trucks and hookers and drugs and booze!” Rudy (Barry Diamond) is the obvious John Belushi surrogate, a vulgar party animal that shoves food in his mouth, smashes beer bottles against his head when excited, and makes a toast to “girls with big tits” without a hint of irony. 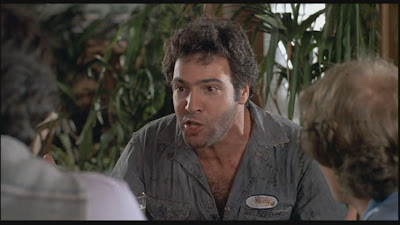 2. Tawny Kitaen: She plays Debbie, Rick’s fiancée who works with her friends at a hip (well, for the ‘80s) clothing store. People tend to forget that Tawny was quite the sex symbol back in the day thanks in large part to the Whitesnake music videos she appeared in three years after her stint in Bachelor Party. Here, she plays Rick’s dream girl – all adorable curls and instantly dated new wave fashion sense. There’s something nice about seeing her at the apex of her hotness instead of the hot tabloid mess she later became known for. 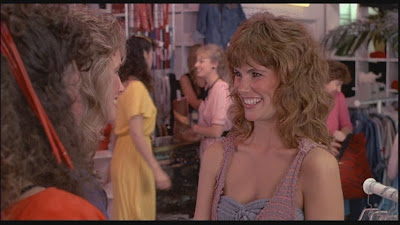 3. “A little vino would be keen-o.” Early in his career, Tom Hanks was known for appearing in popular comedies like Splash (1984) and Big (1988) so it’s rather interesting to see him so thoroughly unfunny in this movie. Every joke he tells feels forced and falls flat, from his unorthodox cooking skills to crappy tennis playing. In fact, it gets so bad that he becomes unintentionally funny. This is no more apparent than in the scene where Rick prepares dinner for Debbie and himself culminating in a hilariously awkward moment where he selects Paprika to be his spice of choice for the meal. It makes you long for the meaningful subtext in The Man With One Red Shoe (1985). 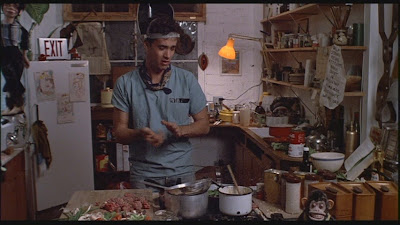 4. Slobs vs. Snobs: Animal House (1978) laid down the blueprint for so many other comedies to follow and Bachelor Party is no different as Debbie’s very rich, ultra-conservative parents understandably disapprove of their beautiful daughter marrying an “immature asshole.” Her father (George Grizzard) even lists off all of Rick’s bad qualities, which only provokes the future son-in-law to be more obnoxious (and unfunny) at a lunch with her folks. 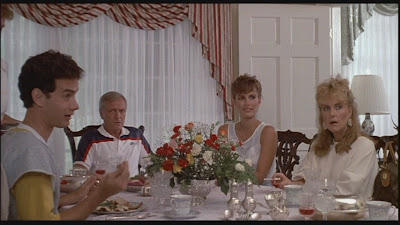 5. Cole (Robert Prescott): Every slobs vs. snobs comedy has to have a villain. When he’s not crushing tennis balls with one hand, Cole is enlisted by Debbie’s dad to pay off Rick and when that doesn’t work he proceeds to repeatedly sabotage the bachelor party. Much like William Atherton, Prescott was typecast in the ‘80s for playing asshole antagonists and would go on to play the dimwitted bully in Real Genius (1985). Fortunately, the actor managed to escape playing a lifetime of pompous jerks when he appeared as an efficient corporate assassin in Michael Clayton (2007). 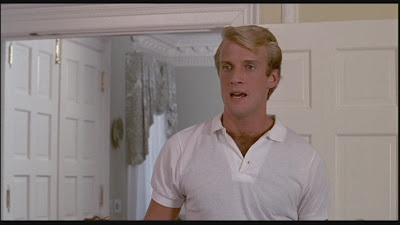 6. Brad (Bradford Bancroft): Hey, if you can’t laugh at a suicidal drug addict, then who can you laugh at? The filmmakers will go to any lengths to get a laugh and at one point poor Brad tries to slash his wrists with an electric razor prompting Rick to deadpan, “Well, at least your wrists will be smooth and kissable.” 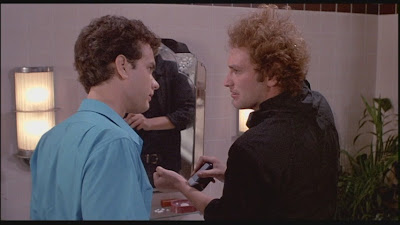 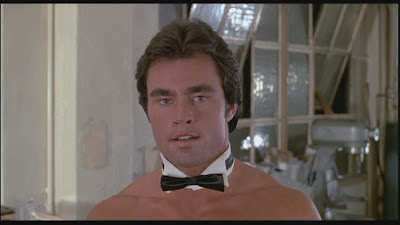 8. “You’re a pimp? You look like Gandhi!” The film’s casual attitude towards racism first rears its head with an Indian pimp that supplies Rick’s party with hookers. He’s actually not too bad – certainly better than Ken Jeong’s overt Asian stereotype in The Hangover. However, Bachelor Party more than makes up for it later on. 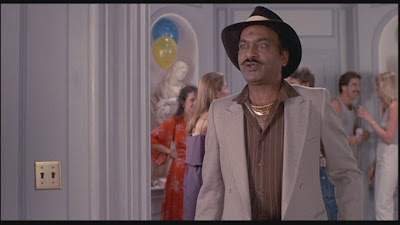 9. The Power of Zmed: Photographer, fashionista, singer (but only with all-girl bands) – Adrian Zmed is a true renaissance man. He was all things to all men, and judging from his antics in Bachelor Party, several women as well. With Hanks proving to be consistently unfunny throughout the movie, Zmed picks up the slack and makes Bachelor Party halfway watchable as Rick’s best friend O’Neill. Maybe it’s that he doesn’t have any pressure to carry the picture and that frees him up to steal it away from Hanks as he channels Tim Matheson at his smarmy best in Animal House with his smartass ladies man. Or maybe it’s his raw sexuality. Hell, Zmed is even able sell crude lines like, “Hey, look at the cans on that bimbo,” and make them sound amusing. 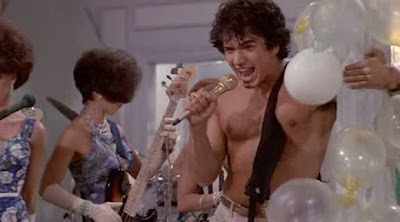 10. Sex with a transvestite: Nerdy concert ticket seller Gary (Gary Grossman) finally hooks up with a woman and she turns out to be a transvestite named Tim, which sends a stunned Gary to the bathroom for a Silkwood shower. You have to hand it to the filmmakers for leaving no stone unturned when it comes to offending. Yep, they even try to piss off transvestites with this crude joke. 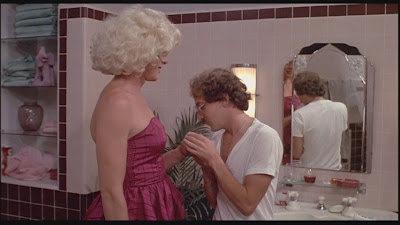 11. Gratuitous nudity: ‘80s R-rated comedies were known for their liberal, dare I say cavalier use of nudity. Remember, this was before the Internet when people had to rent videos to get their fix. O’Neill sets Rick up with Tracey (played by Penthouse Pet Monique Gabrielle) and while she offers up her fetching naked body, he can’t do it because he’s loyal to Debbie. 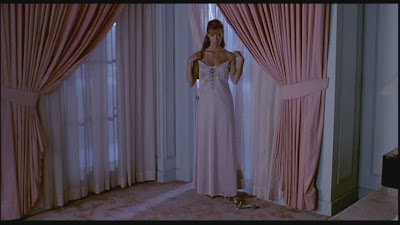 12. “Any of you guys from out of town?” Debbie and her friends decide to infiltrate Rick’s bachelor party dressed as hookers only to get mistaken as actual prostitutes and are delivered to a room full of pervy Asian businessmen in the movie’s most blatantly racist moment. Even more disturbing is when one of Debbie’s friends stays behind so that everyone else can escape; thereby implying that she is gangbanged by the Asian businessmen. 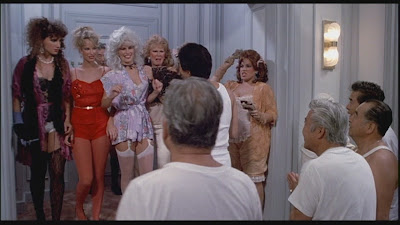 13. Max the Magical Sexual Mule: “Something interesting is going to happen here,” foretells Rick as an exotic dancer and her mule entertain the bachelor party. While she’d dancing, Max decides to help himself to a buffet of pills and three lines of cocaine. He then proceeds to go apeshit and promptly drops dead from an overdose/heart attack thus saving us all from an inevitable bestiality gag. The Hangover has a tiger? Big deal. They don’t have Max whose drug habit would make Hunter S. Thompson proud. 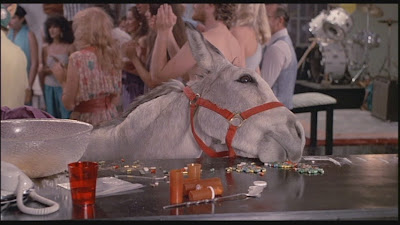 14. Best reaction shot EVER! Now, there's an actor who knows how to commit to a performance. Our heroes hide the recently deceased Max only for the beleaguered hotel manager to discover the animal. His scream of revulsion still haunts me to this day. 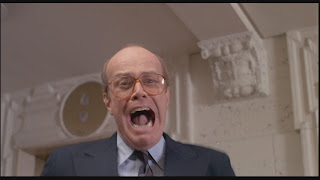 15. “This is the best 3-D I’ve ever seen!” The early ‘80s saw a revival of 3-D movies and Bachelor Party decided to spoof/comment the trend by having the climactic showdown between Cole and Rick take place in a movie theater with their fight mirroring the one the audience is watching in a meta moment evoking Sherlock, Jr. (1924). Take that Buster Keaton! As an added bonus, they also parody the notion of multiplexes by having Rick and co. search through 36 theaters crammed in one building; including one “screening room” that is a janitor’s closet. 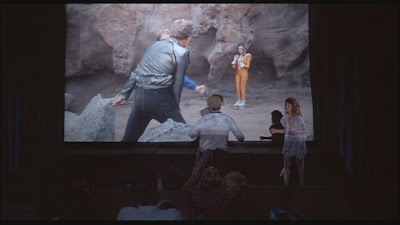 And with Cole vanquished, Rick and Debbie get married and head off for the honeymoon in his school bus with Brad driving, having found a new lease on life. Tom Hanks would never look back, going on to become a well-respected, award-winning actor, while everyone else involved with Bachelor Party wasn’t as successful, most of them are still working in show business in some form or another. Now that he’s become a well-respected actor, one would expect Hanks to pretend that the movie never happened or embarrassed by it, but on the contrary, in 2009 he did an interview with Empire magazine and said, “I’m proud of a lot of the stuff in Bachelor Party. I think I’d just turned 27 years old and I’m ripping it up. We all did. Ripped it up.” That you did, sir. That you did.

Special thanks go to Matt and Rob for their spot-on observations and recollections that were invaluable to this article.
at April 12, 2013