My Science Project had the misfortune of being released during the summer of 1985 and competed with like-minded movies such as, Weird Science, Real Genius, Explorers, and Back to the Future. As a result, it got lost in the shuffle. This is nothing new as everyone knows how competitive Hollywood is and that summer saw studios trying to attract a youth audience with disposable income via teen comedies that mixed elements of science fiction to varying degrees. In retrospect, My Science Project suffered from a lack of recognizable names (Back to the Future had Michael J. Fox and Weird Science had Anthony Michael Hall) and a pretty unusual premise, but it more than made up for it with imagination, a welcome sense of humor and cool special effects.

Two weeks before graduation, high school senior Michael Harlan (John Stockwell) still hasn’t completed his science project because he’s been working a double shift down at Charlie’s garage, which eats up most of his free time. Bob (Dennis Hopper), his cool science teacher, lays it down for him in simple terms: no project = failing grade and no diploma. Harlan’s your typical gearhead (in a nice touch, when asked what’s his sign he replies, “Pontiac.”), much to the chagrin of his girlfriend Crystal (Pat Simmons) who is tired of being dragged to car shows and junkyards. She’s looking for romance straight out of the pages of Cosmopolitan magazine.

Harlan’s best friend Vince (Fisher Stevens) is a transplant from Brooklyn – a wisecracking Italian stereotype that anticipates the Jersey Shore reality television show by decades. Ellie Sawyer (Danielle von Zerneck) is a nerdy girl on the yearbook committee who is sweet on Harlan despite being the polar opposite of his dream girl. She asks him out anyway and much to her surprise he accepts, but mostly to make Crystal jealous. However, Harlan’s idea of a hot date is taking Ellie to a United States Air Force junkyard that used to be a military testing ground back in the 1950s. He’s looking for something to rebuild and use as his science project. They end up stumbling upon an old fallout shelter and Harlan uncovers a strange, pulsating gizmo that absorbs electricity, draining two flashlights and the battery in his car.

The next day, Harlan takes the gizmo to school and figures out how to activate it. In no time it begins to absorb more electricity and two historical objects materialize. Harlan and Vince realize that time has sped up by two hours. It turns out that the doo-dad warps time and space, causing things from other dimensions to appear. So, our heroes consult Sherman (Raphael Sbarge), a gawky nerd sweet on Ellie, to help them figure it out.

It’s safe to say that Dennis Hopper plays ex-hippie now science teacher Bob to perfection. It’s as if Billy, his character from Easy Rider (1969), somehow survived and became a high school educator. As you would expect, Hopper adds his own unique flourishes to the role, like in his first scene, where he lays down the law with Harlan, he proceeds to take a hit of oxygen after the student leaves. Was Hopper getting a little practice in before making Blue Velvet (1986) with David Lynch? Once the gizmo goes haywire, Hopper has a lot of fun morphing into a mad scientist as Bob loses his mind … or is experiencing one hell of an acid flashback.

Fisher Stevens plays Harlan’s sidekick and comic relief. The actor understands that Vince is all swagger and attitude, cracking jokes to break the tension and as a result, he gets the lion’s share of quotable dialogue, like when the gizmo puts on a snazzy little light show, Vince jokes, “I seen lights like this at an Ozzy Osborne concert.” John Stockwell’s Harlan is a little on the bland side. The actor does a fine job with what he has to work with, which ain’t much. He’s not the most charismatic actor and this may also be part of the problem. This allows Stevens to steal the scenes they have together as the much more colorful character.

Much like Jordan in Real Genius, Ellie is a smart and beautiful nerd. She starts off as a strong, independent character, but by the film’s exciting climax she’s basically reduced to a damsel in distress that Harlan must rescue. That being said, Danielle von Zerneck and Stockwell have good chemistry together as evident in a nice scene where Harlan and Ellie learn something about each other and he confesses to her that he’s better with cars than with people because he trusts them more. 1980s mainstay Richard Masur shows up as a laconic lawman complete with cigar and ten gallon hat. Veteran character actor Barry Corbin plays Harlan’s good-natured single dad and Raphael Sbarge is quite good as the hopelessly geeky Sherman. I like how in one scene we see him deeply immersed in Frank Herbert’s Dune. Nice touch.

For the time and the budget they had, the special effects for My Science Project are pretty impressive, gradually building in scope and spectacle over time as the gizmo gains more power, culminating with Harlan, Vince and Sherman making their way through the mist-enshrouded corridors of their high school caught in the heart of a multi-dimensional warp. Our heroes soon find themselves doing battle with various historical figures from primitive man to Roman gladiators, which are just a warm-up for the main event involving a fantastic stop-motion animated beastie as the school gym is transformed into the Jurassic era. Naturally, if this film were made today it’d all be CGI’ed to death and so, the old school effects give everything a tangible quality that seems more real.

In the early ‘80s, Jonathan Betuel worked for a Madison Avenue advertising firm while writing screenplays in his spare time. His persistence paid off when his script for The Last Starfighter (1984) was made. He used this buzz to shop around his script for My Science Project, but would only go with a studio that would allow him to direct it and include an exciting battle between the protagonists and Tyrannosaurus Rex. Producer Jonathan Taplin (The Last Waltz), who was making the effects-heavy dinosaur movie Baby: Secret of the Lost Legend (1985), liked Betuel’s pitch and based on the strength of his work on The Last Starfighter, agreed to make My Science Project under his Touchstone Pictures production agreement.

Betuel was a huge science fiction fan and employed the structure of placing ordinary people in extraordinary situations as he remarked in an interview, “You must start with one foot in reality, so you can take that next big step somewhere else.” He cited George Pal’s The Time Machine (1960) as partially inspiring his film as well as various theories about time warps being linked to black holes allowing travel through time and space: “I think a time-space warp is a logical and interesting development. That’s the theoretical jumping-off point that I used.” He wrote 14 drafts over 14 weeks on evenings and weekends during principal photography on The Last Starfighter.

Principal photography began in August 1984 with a $10 million budget, $500,000 of which was spent on the T-Rex sequence, and lasted for ten weeks with November dedicated to filming the live-action aspects of the aforementioned set piece. For the puppetry aspects of the T-Rex, the studio had considered Phil Tippett, but he was unable to do it because of busy schedule with The Ewok Adventure. The next person they approached was Rick Baker, but he hedged his bets, not having worked since Greystoke: The Legend of Tarzan, Lord of the Apes (1984), but eventually took on a consultant role. It is a testimony to Betuel’s strong script and powers of persuasion that a novice director like himself was able to enlist the likes of veteran make-up FX artist Baker and actor Dennis Hopper, the latter whom met with Betuel three times before agreeing to do the film.

My Science Project received mixed reviews from what few critics saw it. In his review for The New York Times, Stephen Holden felt that the film, “started out as a likable teen-age comedy with snappy repartee, turns into a dull, heavy-handed series of encounters between the kids and stick-figure historical creatures that materialize behind overturned gym lockers.” The Globe and Mail’s Salem Alaton wrote, “Because of all the flubbed secondary characters in My Science Project carries around, it hardly coheres until its big moment, and then it simply goes kablooey.” In his review for Newsweek magazine, David Ansen found the “principal pleasure” of the film to be Dennis Hopper’s performance and little else. 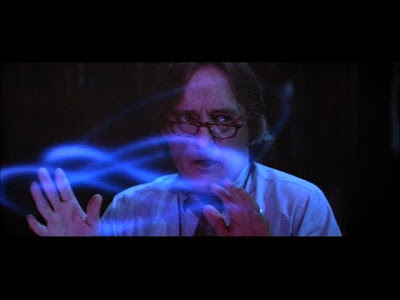 If My Science Project teaches us anything it’s that we shouldn’t meddle in things we don’t understand, especially when it threatens the very fabric of our existence. Of all the teen science fiction films to come out in ’85, Back to the Future was easily the most popular, Real Genius went on to develop a small cult following, while My Science Project was relegated to obscurity, not regarded with the same nostalgic love as say Joe Dante’s Explorers. It’s too bad because My Science Project is arguably the most unabashedly fantastical and funny of them all. This particular trend of film reached its zenith with Bill and Ted’s Excellent Adventure (1989), which closed out the ‘80s with a light-hearted romp through time and space featuring two goofballs also trying to make their way to the end of the school year. I guess I have a soft spot in my heart for My Science Project as I saw it at an impressionable age. Looking at it after all these years it has aged pretty well and was as fun and entertaining as I remember it being back in the day.

This review was inspired by two excellent takes on this film - The Film Connoisseur and Junta Juleil's Culture Shock.